History and Organization of the Hope Church

ONE HUNDRED YEARS OF SERVICE AND CHRISTIAN WITNESSING

A mural in downtown Opelousas

In the year 1871, there lived in the village of  Opelousas, Louisiana, a most consecrated group of people who, having no Church of their own in which to worship, decided to organize a Presbyterian Church.

At a called meeting at the home of  Dr. Louis Hadden on May 20, 1871, the following persons signed their names as Charter Members:

On June 27, 1871, divine service was held for the first time in the Methodist Church.  Usually the services were held on Saturday evening at the Methodist Church, Belleview Church, (a Union Church about six miles from Opelousas) or at the home of the Pastor.

On September 28, 1872, a meeting of Session was called to elect a delegate to attend a meeting of Synod at Aberdeen, Mississippi, to present the request of the members of this Church that it be placed directly under the care of the New Orleans Presbytery. The Opelousas Church up to this time had been under the Mississippi Presbytery.

In 1875, with the consent of Presbytery, the Licentiate, Rev. U.M. Stratton, spent a portion of his summer vacation at Opelousas and adjoining country.  He preached for seven weeks for which he was paid $40 for his services, besides board which was furnished.  He also preached at Atchafalaya and Vermillionville (now known as Lafayette) churches.  He preached some very fine sermons and stressed the importance of making an early effort to secure a house of Worship.

At a meeting of the Session, April 1, 1877, the Moderator stated that the “committee at Balti-more” had allowed the Opelousas Church $300 to aid in building a Church.  In consequence of shortage of funds, the committee postponed the acceptance of the appropriation, and advised that Vermillionville (now Lafayette) was prepared to build, and this Church was not.

They recommended that the $300 be sent to the Vermillionville Church, and stated that the Opelousas Church would not be inconvenienced by the delay. 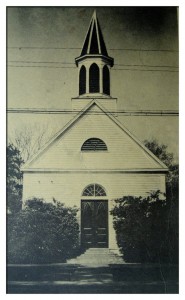 On March 21, 1882, trustees of the Church, five in number, purchased a very fine and centrally located lot in the town of Opelousas, situated on the corner of Main and Cherry Streets.  This lot was 170 feet square.  Trustees were: Dr. L. Hadden, Chairman; L.A. Black, Thomas B. Smith, Charles T. Houston and J. E. Wilson.  The amount paid was $400.

During the two decades from 1940-1960, the membership grew, providing the resources to construct the educational building which was erected in 1953.  In 1961, the white frame chapel was given to a congregation and moved to another location.  This cleared the way for the present Church building to be constructed on the corner of Main and Cherry streets.